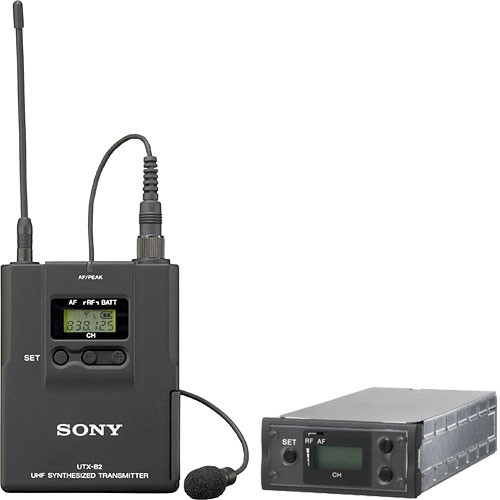 Every live sound gig presents a lot of hurdles to leap over and challenges to deal with - don't let you wireless microphone system be one of them. Sony keeps wireless simple, with their modular UWP line. You start with an MB-X6 tuner base or SRP series powered mixer (sold separately) and add URX-M2 wireless receiver (tuner) modules as you need them. The Sony UWP-X7 wireless system includes a URX-M2 wireless receiver module, a discreet UTX-B2 wireless bodypack transmitter, and a low-profile ECM-X7BMP unidirectional lavalier microphone - in short, everything you need to add a complete wireless channel to your MB-X6 tuner base or SRP series powered mixer. The synthesized Sony UWP-X7 wireless system is incredibly easy to set up and freakishly consistent, even in environments that balk normally trustworthy wireless systems. Initially locking the transmitter to the receiver takes only seconds, and one they're set, all you have to do is turn the system on - it's that simple. And thanks to Sony's precision PLL Synthesized System and Space Diversity Reception System technology, you can reliably run up to 16 UWP-X7s (or any combination of UWP wireless systems for that matter) at once. Sony UWP-X7 Wireless Lavalier Microphone System Features at a Glance: An excellent wireless system for live performance sound reinforcement - System consists of an ECM-X7BMP unidirectional lavalier microphone, a UTX-B2 wireless bodypack transmitter, and a URX-M2 wireless receiver (tuner)Includes windscreens and a microphone-holder clip for the ECM-X7BMP unidirectional lavalier microphone, as well as a belt clip for the UTX-B2 bodypack. Receiver (tuner) module is not a standalone unit and must be installed in MB-X6 tuner base or SRP series powered mixer. Frequency Range 638MHz - 662MHz (TV channels 42 to 45) with 188 selectable frequencies. Occupied RF bandwidth 24MHz. Compatible with other Sony UWP series wireless devices operating on the same frequencies. Keep your wireless system simple, flexible, and reliable, with a UWP-X7 wireless lavalier microphone system from Sony!

Of all the places I could shop, why should I buy from Fumfie.com?
Our team at Fumfie are experts and can help you make the right decision for your next camera or drone. Providing the best deals in United States, Fumfie.com is on the side of the consumer.

What is Fumfie.com's Shipping Policy?
At Fumfie.com, almost all of our cameras, drones and accessories ship free.