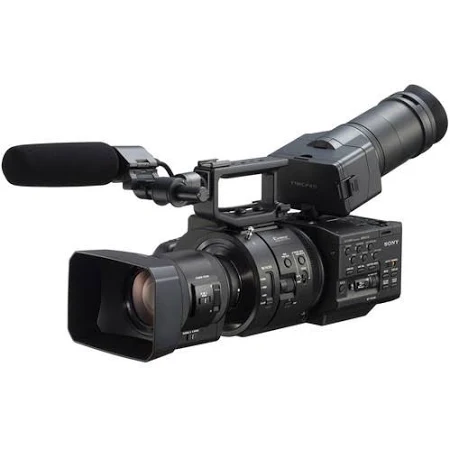 The Sony NEX-FS700R Super 35 Camcorder with 18-200mm f/3.5-6.3 Lens is an update to Sony's NEX-FS700U that enables 4K/2K 12-bit RAW output, S-Log2 recording capabilities, and features a Sony 18-200mm f/3.5-6.3 PZ OSS E-mount lens. The NEX-FS700R retains all the features of the NEX-FS700U, including the native 4K sensor, Super Slow Motion recording, built-in ND filters, and CineGamma curves. 4K/2K RAW is recorded to the Sony AXS-R5 Recorder via the HXR-IFR5 Interface Unit, or to compatible third party recorders such as Convergent Design's Odyssey 7Q via the 3G/HD-SDI output. The HXR-IFR5 Interface Unit and external recorders are sold separately.

The Super 35mm sized sensor matches that of standard film and digital cinema cameras. It accepts interchangeable E-mount lenses, as well as a variety of 35mm SLR and DSLR lenses and professional cinema lenses with the use of optional third party adapters. On-board, the NEX-FS700R shoots full 1080p video in a range of frame rates up to 60p, with bursts of up to 240 fps in full HD resolution and 960fps at lower resolutions. When used with the HXR-IFR5 Interface Unit and AXS-R5 Recorder, you can record continuous 2K RAW at up to 240fps and 4K RAW at up to 60fps. 120fps 4K RAW recording is possible in 4 second bursts. This makes the NEX-FS700R a high-speed, 4K camera ready for professional shoots such as indie films, commercials, corporate videos, and music videos.

Why should I buy from Fumfie.com?
With a selection of the most popular drones and cameras on the market at the very best prices, Fumfie.com is committed to you the customer.